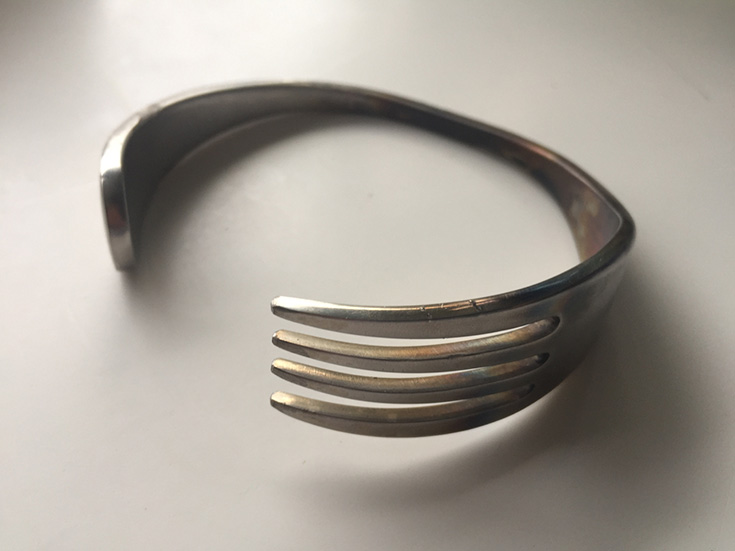 There was a time when eating at a table where meat and dairy products were being served didn’t faze me at all.  Even when I became vegan three years ago, I could ignore the smell and the sight of flesh being consumed let alone the predictable vegan jokes.

Two experiences changed all that.

The first was at an RHS lunch on Press Day at the Hampton Court Flower Show in 2015. Nine plates were served with a very odd combination of pork and beef arranged into a very odd-looking meat tower.  Virtually none of it was eaten – too chewy by all accounts.  My vegan dish of mange-tout, pea tips, alfalfa sprouts and a balsamic sauce was miniscule by comparison but delicious.  I came away not only hungry but fuming that animals had to suffer and die for that meal and that their bodies were just tossed away as garbage.

The second was watching Dairy is Scary on YouTube and the film documentary, Earthlings which catalogues the full extent of how animals are exploited for food, entertainment, clothing and medicine. From that moment being in the company of others consuming body parts or secretions served only to conjure disturbing and, let’s face it, perverted images of sexual exploitation and sadistic abuse (again, watch Dairy id Scary).

For three years I’ve done my best to avoid such situations and I’ve been reasonably successful but of course it comes at a price.

I don’t get to eat with some family and friends as often as I’d like and this can also come across as being extreme or disrespectful.  Some are understanding, others are confused.  A few have occasionally made more of an effort, laying on a vegan spread or ordering meat-free items from a menu but see no harm in bringing out the cheeseboard or offering milk for coffee.  I remember doing the same when my step-daughter (vegan since the age of 13) came to visit. We would always prepare a vegan meal but I didn’t see a problem in adding a dash of milk in my tea because no animal had to die for that, right?  Wrong.  Not only is a dairy cow slaughtered after just a quarter of its life it also has to endure the indignity of being forcibly inseminated and the psychological trauma of having its calf taken away each year.  And, if the calf is male it will be shot within 24 hours or reared in a crate, away from its mother, for veal.  All in all, a miserable short existence and, in many ways, even more cruel than the meat industry.

When I first became vegan people used to say “we’d love you to come to dinner, we’ll have some vegan options but we’re catering for all personal choices, we hope you understand.”

Once you have seen the truth behind animal agriculture and how they are exploited and killed it’s very difficult to forget or, indeed, explain.

One way of looking at it is this:  imagine you are invited to dinner by a friend or family member who has invited a guest from Korea whose preference is to eat dog.  Would “we’re catering for all personal choices” justify this and would you feel comfortable with someone eating minced whippet or Labrador chops beside you?

By my reckoning there are four options.  1. Go to the meal, try and ignore the chopped-up body parts and secretions, smile and pretend that everything is ok. 2. Go to the meal and use the opportunity to talk to everyone there about the reality of animal agriculture, the harm it does to animals and the environment and the negative health implications. 3. Don’t go to the meal. 4. The host makes a vegan meal for everyone.

From experience, people naturally prefer you to choose option one, get annoyed at option two and are disappointed at option three.  Option four is by far the easiest but is rarely offered.  Catering for those who prefer violence in their food is, it seems, more important. Unknowingly I had already taken the pledge but had never really considered it as a form of activism and, having never worn an item of jewelry in my life was curious about the bracelet.

While the bracelet is a useful conversation piece the Liberation Pledge is also a form of self-preservation.  Activists see much of the horror that is hidden from consumers for obvious reasons so confronting it again at meal times, a time which is meant to be enjoyable, relaxed and peaceful instead becomes at the very least uncomfortable, often stressful and occasionally traumatic.  Even with close friends and family who you know as good people it’s hard not to be judgmental about their insensitivity towards the exploitation of and cruelty to animals for a fleeting taste sensation.  This doesn’t make for a happy occasion and most reasonable people wouldn’t want their guests to go home disturbed by the experience. While the Liberation Pledge focuses on the dinner table I also tend to avoid buffets or events where canapes are being served and people get uncomfortably close trying to make themselves heard in a crowded room.  Dodging fish-breath or projectiles landing in in your drink doesn’t make for a pleasant occasion.

Apart from unexpected situations, the only exception I tend to make these days is at a funeral reception.  People are more preoccupied with the death of a loved-one than the death on their plates and so a rant about animal rights won’t endear you to non-vegan mourners.   Ironically, having watched What the Health and many nutritional videos by Dr Michael Greger, it’s clear that the death on their plates might well have caused the death of the loved-one in the first place.  Actually, it’s probably best not to mention that either if you want to get out of there alive. My thanks to Wes and Bamber Wallis for having the tools and patience to bend my fork of choice.  If they’d known just how stubborn that utensil would prove to be, I’m sure they would have told me to fork off.