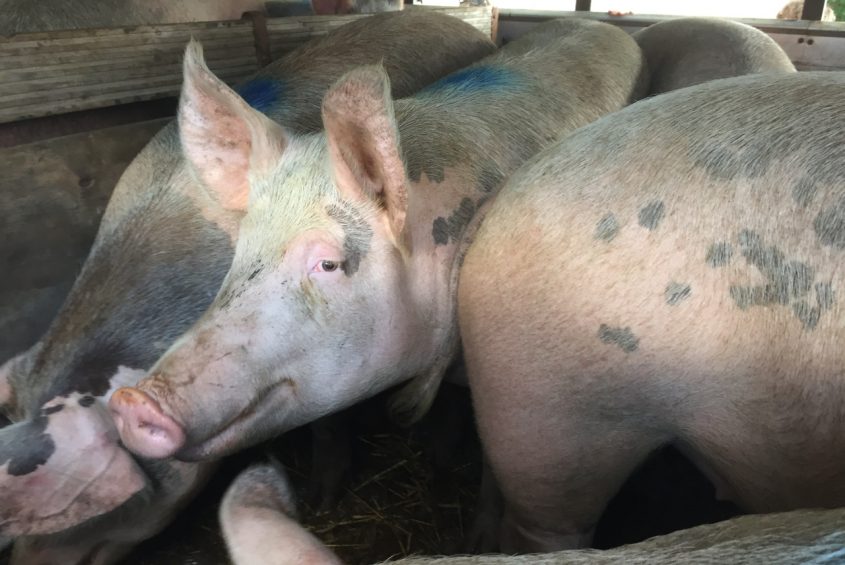 My partner, Christine, and I were vegetarian for 30 years before adopting a vegan lifestyle. For two of those years we slipped back to being pescatarian, the excuse so pathetic that I’ll just be honest – we missed eating fish.  God knows how frustrating this must have been for Christine’s daughter, Joanna, who has been vegan for more than 40 years and who has raised vegan twins.  It was only when another grandson made his own mind up to become vegan from an ethical standpoint that we gave it serious thought.  If a twelve-year-old can work it out, why couldn’t we?  At the very least we should try it.

I’ll admit to having the same nutritional concerns that most people have about a vegan diet but a little research  (nutrtionfacts.org) soon showed that I wasn’t going to die of a protein or vitamin B12 deficiency and I was fairly confident that, despite being told to the contrary time and time again, I wouldn’t find myself marooned on a desert island with only a pig to eat any time soon.

Surprisingly, several weeks after becoming vegan, I felt better than I had for years. Within a few months, had lost half a stone excess weight and within a year an allergy to a wide range of fruit (a kick in the teeth for a vegetarian I can tell you) disappeared.  The cherry on the cake was that some arthritis in a big toe eased enough to wear shoes for the first time in ages without discomfort.  Coincidence?  Maybe.

It’s only when I took a little time to learn more about the ethics of animal agriculture and the detrimental effect it has on the environment and human health that I really began to understand the bigger picture.

Just as shocking was the propaganda that I suddenly become aware of: ‘Humane Slaughter’, ‘High Welfare’, ‘Red Tractor’ and ‘Free Range’, all the myths about ‘Happy’ or ‘Good’ meat to ease consciences or fool people into thinking that it’s perfectly ok to exploit and hurt animals.  It’s really very clever.  The Laughing Cow, Dancing Chicken and Smiling Pig logos are there to make you think that everything’s fine and dandy at Old MacDonald’s Farm.  I fell for it myself always seeking out free range eggs, milk and cheese.  Eventually I understood that the dairy industry is the cruelest of all and that it doesn’t matter how good the welfare is, the end is always the same; an unnecessary violent death inflicted on innocent beings that want to live. Most carnists (meat-eaters) would agree that animals have moral value and should be well-treated and cared for before they’re killed.  Concern for welfare is an acknowledgement that animals have feelings and lives that they enjoy and therefore should be treated with the respect that they deserve.  All this disappears of course when it come to the kill floor.  One minute we’re concerned for their rights the next we’re not.  The whole industry relies on this disconnect and we’re taught that it’s natural and necessary. Of course it’s neither, but when the majority buys into it, it becomes normal.

Fortunately though the internet is helping to open the shutters.  The truth is there for everyone to see.  My Road to Damascus moment came after watching three film documentaries: Forks Over Knives, which explained the health benefits of being vegan, Cowspiracy, that sheds light on the environmental devastation caused by animal agriculture and lastly, Earthlings which pulls no punches in revealing the full extent of how we exploit non-human species.  The above-mentioned films should be all you need to see to make you seriously consider a plant-based lifestyle and for those who think that these films don’t apply to the UK, please watch Land of Hope and Glory, a recent film documentary showing standard practices in this country.

The shock of the truth had me writing feverish emails imploring people to live vegan and wake up to the holocaust that is so well sugar-coated.  When friends and family suffering ailments ignored my well-intentioned advice about their diet preferences and continued to eat the things that were making them sick it showed me just how difficult it is for people to unlearn all the things they have been taught by parents, schools and governments since birth, even when their health and the health of their family is at stake.  I had to keep reminding myself that it had taken me 56 years to work it out.

Injustice has always been a trigger for me but couple this with the incredible benefits that a plant-based lifestyle can bring to the environment and our personal health it’s impossible (especially as a gardener) to keep quiet about it. The amount of time I spend on activism pales to insignificance compared to many of the amazing people I have met over the last few years but every little helps and you never know where one remark or conversation will lead.  I attend vegan outreach events, anti-fur demos and slaughterhouse vigils where we bear witness to animals and record their final moments before they are killed and chopped into pieces for nothing more than a brief taste sensation.  It’s the least I can do for ignoring this social injustice and I hope that this blog will, in part, make up for the time I don’t spend on direct action.

In addition to the films already mentioned (and for anyone intellectually challenged by veganism) I will add this speech by Earthling Ed which explains clearly and concisely why we should consider a plant-based diet.  It’s not graphic and has been given to university students throughout the UK.  He’s currently on tour delivering his message in the USA and Canada.

At risk of overloading you with links (it’ll be a handy resource page to refer to in future posts) I’ll finish by saying that you are affected by any of the films and want to consider a vegan lifestyle you might be interested in challenge22.com a website offering personal guidance, recipes and support from mentors and clinical dieticians.  Finally, I’ll always be pleased to hear from anyone who needs any tips on going vegan and, even better, becoming active in the fight for animal rights.

Thank you for your time.

Recipe of the day

The Vegan Society website has a great range of recipes to dip into.  A friend cooked this carrot cake for us and it was a triumph.  I’ve tried it since and, while it was still very good it was a touch more oily than I remembered it to be so you might need to experiment a bit with quantities (we also tend to add slightly less sugar to most recipes than is recommended these days) to get it right.

It would help if I remembered to take a picture of  the damn thing.