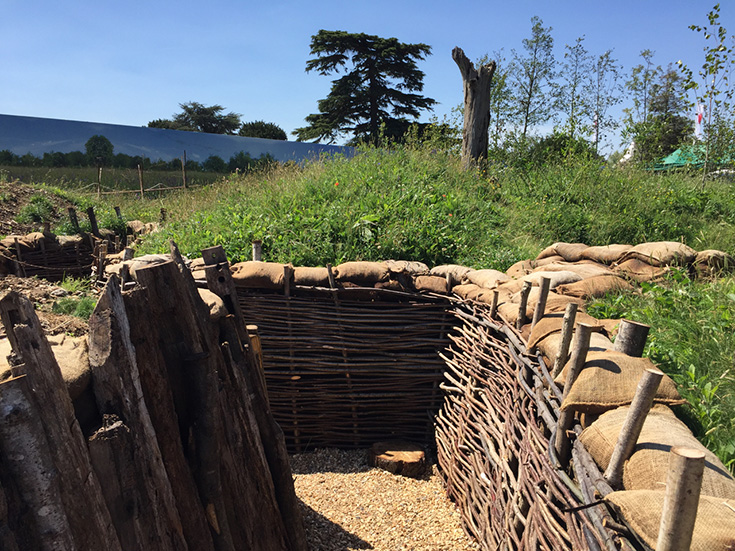 Bloody Nora!  I’ve just realised it’s exactly twenty years since I made a garden at the Hampton Court Flower Show. Sponsored by Thames Water, the triangular-shaped redoubt with reclaimed railway sleepers and burnt elm spikes enclosing  a large pool fed by rills  was my favourite collaboration with sculptor, Johnny Woodford.  Dramatic and threatening from the outside but peaceful within, we’d accidentally made our first contemporary paradise garden providing much needed respite when we needed a break.

This year’s show has just closed and I’m pleased to say it was a good one.  Matt Childs’s garden for B&Q was cleverly designed and inventive with his re-hash of off-the-shelf products and beautifully planted with a mixture of exotics featuring the much-maligned (at least in garden designer circles)  Busy Lizzie.  There was a balance with his use of space, form and texture that made it a no brainer for Best in Show. I was also drawn to Anton Chekhov’s Garden (designed by Anna Benn and Hannah Gardner) and Ula Maria’s Style and Design Garden both of which carried the intimacy of a private garden rather than a set piece, a difficult trick to pull off.

RHS feature gardens by Piet Oudolf  (celebrating him as the first Horticultural Hero) and Anne-Marie Powell’s grand endeavour capturing much of the UK’s landscape for BBC Countryfile wooed the crowds as did the beautifully executed Battlefields to Butterflies by Todd Longstaffe-Gowan for the Historic Royal Palaces and The Royal Parks Guild.  Trenches, barbed wire and water-filled craters eventually giving way to wildflower meadows paid tribute to the 24 men of the Royal Parks and palace gardens who gave their lives in the First World War.  Troops of schoolchildren were allowed to wander through the (thankfully dry) trenches on press day and I found myself leading a small band of brothers and sisters out through the metaphorical fields of regeneration and hope.  It was a surreal experience.

While more difficult to make an impact at the show than it was two decades ago it’s still a useful platform for young designers trialling  new ideas especially in the categories that encourage a more conceptual approach to horticulture.  Winner of the Gardens for a Changing World category was Joseph Gibson’s ‘Conscious Consumerism’ focusing on deforestation in the Amazon caused by the meat industry.   Gibson, an Inchbald graduate who had spent 18 months travelling in South America had seen the destruction for himself and felt compelled to raise awareness once back in the UK.

Curiosity surrounding this garden was immediately heightened by the timber-slatted boundary resembling a cattle truck.  Once inside, the metaphors were clear and pulled no punches.  Pristine rainforest at the entrance quickly gave way to stumps where the forest had been cleared for grazing or monocrops – soya being the main culprit, much of it being exported to Europe as animal feed.

After the deforested section came the abattoir complete with meat hooks, bone-saw and blood-soaked walls and overalls, not nearly bloody enough but Gibson didn’t want that to be the main point of focus.  Exiting the exhibit through an area of desertification you’re confronted with two choices, a dead end with an empty oxygen cylinder where the land is spent and can’t regenerate or a clear exit past a single palm seedling,  a fragile semblance of hope.  Simple and powerful this exhibit is probably the most important conceptual garden I’ve seen and the RHS should be commended for allowing the exhibit to be show-cased.

I watched people queue in the searing heat and earwigged as they engaged with Gibson, eager to learn more.  Most if not all took it seriously. “People are shocked that 80-90% of rainforest destruction being caused by the meat industry,” he explained.  “Most think that palm oil is the main culprit but the meat trade is far worse.”  He hopes the garden can be relocated so that it’s message can be experienced by others.

I’m also remembering that paradise garden moment 20 years ago when ignorance was bliss and the sound of water rills cooling our feet was enough to make us think that all was right with the world. We have the internet now, we have the facts and, collectively, we have the power (not to mention the responsibility) to make a difference through more considerate and more compassionate choices.  I for one think the children are worth it.

PS  Apologies for lack of recipe this time!