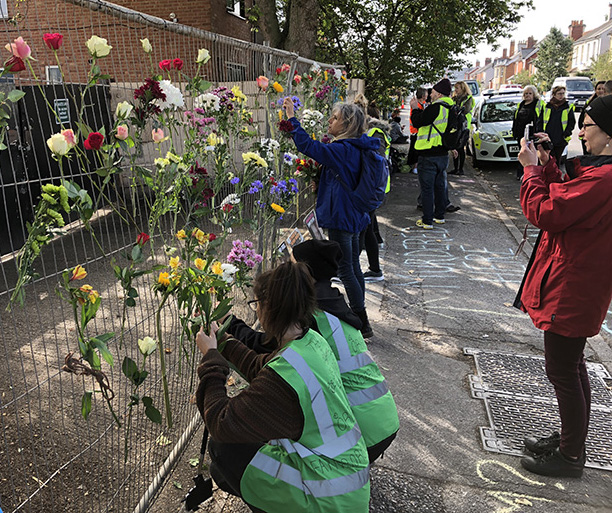 A Garden for Hell’s Gate

Happy birthday to Farnborough Vigils who celebrate their second anniversary this week.

It seems longer.  A sign maybe of the intensity in witnessing innocent animals arrive at slaughterhouse gates and looking at them in the eye minutes before their lives are brutally taken.

To mark the event, activists lay bunches of flowers outside as a mark of respect to the thousands of beings that are butchered there each year. It’s three hours before the first truck arrives. Sheep. The feeling of not being able to help someone about to meet a violent death is impossible to describe, but you see it clearly on the faces of those trying to offer a little comfort to the victims.  I nearly drop my phone trying to post a live recording on Instagram and miss my chance before the gates close to the ensuing, respectful silence.

Amidst my fumbling, a message from a friend appears.  He says he much prefers my gardening posts on Instagram to my posts about animal cruelty, some of which he can’t bring himself to look at.  His wife, however, together with his sister and three of his children have looked at them and are on their way to being vegan. “Keep up the good work,” he says, “but please keep gardening.”

After three years of banging on about animal rights I’m receiving more and more encouraging messages like these.  They are priceless. They keep you going as much as the confused and terrified look you see in the eyes of creatures whose only crime is being born with fur, feathers, scales or hooves.

I’m reminded of The Shawshank Redemption when Andy Dusfrane (writing weekly letters to the state requesting funds for the prison library) finally receives a cheque for $200 and a note saying “please stop sending us letters”. “It only took six years,” says Dusfrane, “from now on I’ll write two letters a week.”

Yes, there’ll be no let-up, I make no apologies for that, but I’ll do my best to keep gardening and, in a way, this is a gardening post. A trailer full of beautiful pigs arrive. A few of them lay prostrate, silent, head down between outstretched hooves, eyes looking up like nervous dogs about to be scolded by their human companions.  They know something’s wrong. For a brief moment they were someone.  Once the gates close they are something; a commodity.

Silence again.  Someone instinctively picks up a bunch of flowers and threads individual stems through the Heras fencing.  Others follow suit.  No conversation, no plan, no worries about plant associations and colour clashes, just heartfelt spontaneity.  Any concern that the slaughterhouse workers would take them down is soon forgotten as the bleak, industrial fencing becomes a beautiful tapestry. It’s clear that no one will be cold-hearted enough to spoil this wall of flowers, at least not while we’re there. This garden, on the very gates of hell itself, is a message of love and hope.  It says that veganism is not a fad.  It says that those who have made the connection and can see speciesism for what it is, won’t be embarrassed for showing compassion, won’t stop banging their drum, posting their pictures or writing their words until the horror we inflict on innocent creatures comes to an end. Change is happening.  Be part of it and be on the right side of history.

Please leave animals off your plate and live vegan*.

*NB If you want to know more about the importance of plants and how they are the answer to most of the world’s most pressing problems please come to the UK’s first Vegan Garden Festival at Hortus Loci Plant Centre, Hound Green on 15th September.  You will be treated to gardening talks and advice, Q&A’s, vegan cooking and cocktail demos, a special new book preview and a delicious lunch available to purchase from The HOBO.CO.